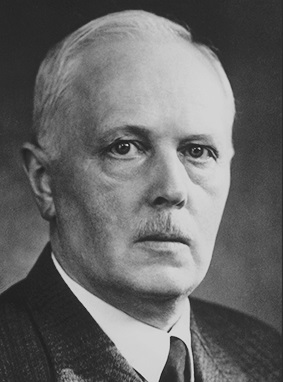 Christen Møller (1886-1957)  was the Director of Handelshøjskolen from 1938-1957. He implemented a significant enhancement of the school’s research activities. Before that, he had become doctor of philosophy in 1927, reader the year after, and in 1934 professor of German philology at the newly established university in­­ Aarhus.

On paper, Christen Møller did not have any qualifications for being at the head of a business school; however, under his tenure he managed to implement two major study reforms and enhance research through the establishment of new professorships in economy, law and language.

Christen Møller fought a tough battle for freedom in research, just as he was determined to boost the self-image of Handelshøjskolen and its position as an institution of higher education in line with the universities. This led to an increasing wish of more independence among academic staff, which caused several controversies between Handelshøjskolen and the Danish Society for the Advancement of Business.