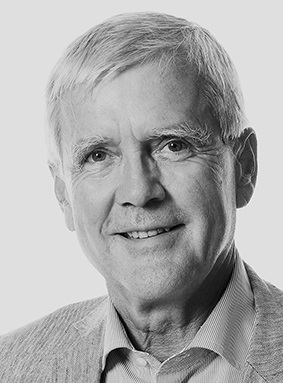 Under his leadership between 1987-2009, Finn Junge-Jensen (b. 1944) headed a development that transformed Handelshøjskolen into a full, international business university. He earned an MBA from the University of Wisconsin in 1969 and was affiliated with a research project at the Department of Organization and Industrial Sociology at Handelshøjskolen the year after. He became a research fellow in 1972 and was appointed dean of the Faculty of Economics and Business Administration in 1982. In partnership with the dean of the Faculty of Modern Languages, he drove the establishment of SPRØK, a new and trailblazing programme that combined business languages and economics­.

For more than 22 years, Finn Junge-Jensen pioneered a veritable transformation of Handelshøjskolen manifested by the change of name to the more international Copenhagen Business School, CBS. The­ number of programmes was increased drastically, including new disciplines such as the humanities and social science, while­ research was boosted through the appointment of a large number of professors. Student numbers were more than doubled to 20,000, and CBS’ activities were all gathered in a number of new buildings on Frederiksberg Campus.