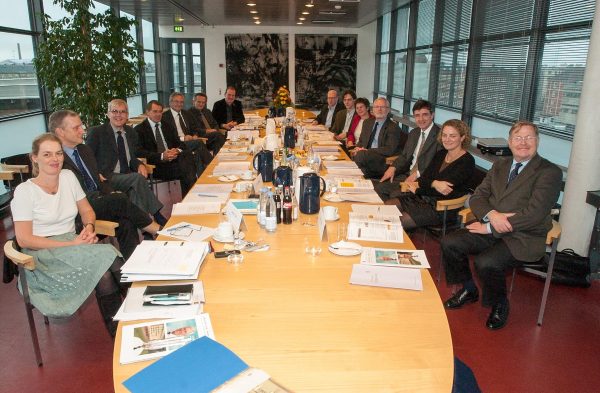 In 2003, the adoption of a new university reform leads to the institution of a new board of external members, which becomes the supreme governing body of the university. CBS Case Competition is launched the year before, and Handelshøjskolen once again makes a slight change to its name.

Just a few months into his term of office, the newly appointed Minister of Education Helge Sander initiates an amendment of the existing University Act. The new act is passed in May 2003 by a large parliamentary majority. The new division of labour and structure leads to the dissolution of the Advisory Council, Handelshøjskolen’s supreme collegiate body, in late 2004.

The Advisory Council is replaced by a new board of external members who are accountable to the minister, with whom development contracts are to be continually drawn up. Chair of the new board, the CBS Board of Directors, is former CEO and Managing Director of B&O Anders Knutsen. The Academic Council is also established, and the study boards are upheld.

The year before, the first of many CBS Case Competitions is successfully launched. It becomes an annual event and develops into a key attraction.